My friend Elizabeth McCall wrote this fascinating article about Elvis Presley and his love of horses. It’s going to be out in the next issue of  “Cowboys & Indians” magazine but you can have a sneak peek – right here, right now!!

I always liked Elvis in “Blue Hawaii” something about living on an island ranch, I guess :)

Enjoy the memories and maybe we’ll all meet up sometime at the barn in Graceland!
Have a fabulous weekend and take a minute to remember our firefighters and soldiers on this hot Fourth of July holiday.
tim farley

All The King’s Horses

Few outside his innermost circle knew Elvis Presley had a heart for horses. 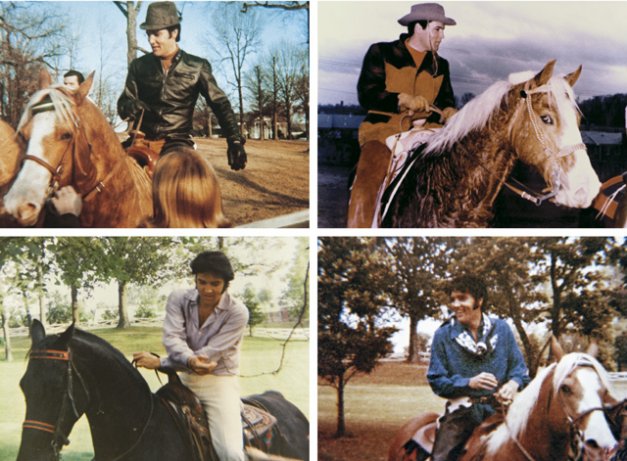 The world knew Elvis for his music, his movies, and even for his motorcycles. People close to him knew him for his love of horses. A rich part of his personal life that largely escaped public view, his equine devotion opened to the world in 2009 when the stables at Graceland opened to the public in Memphis, Tennessee.

“Actually, Elvis was a little bit afraid of horses at first because of something that happened on a movie set,” says Alene Alexander, Graceland’s stable supervisor. She’s referring to the time a horse ran away with the actor during production of Flaming Star, in which Elvis plays Pacer Burton, the son of a Kiowa mother and Texas rancher father who ends up caught between both worlds. But after buying wife Priscilla a black quarter horse named Domino, Elvis had a change of heart about riding.

“After he saw Priscilla ride, he became interested in owning a horse,” says Alexander, a former schoolteacher who has become the King’s de facto equine historian after 30 years at Graceland. Not just any horse — he had to have a golden palomino. “He would take the guys [in his entourage] and Priscilla, and they would go out and literally knock on people’s doors who had horses, looking for a golden palomino.”

It was often 3 in the morning when he took those horse-hunting trips. “Elvis couldn’t travel during the day. If he did, the world would be following him. …

I don’t know if you’ve heard this yet but it’s nice they put it together …
We have some sound clips on the site, too.