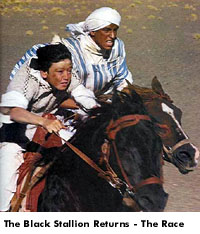 The story of a young boy and his horse continues in this remarkable adventure. Alec must follow the trail of mysterious strangers who have stolen his horse, “Black.” His quest will lead him on a perilous adventure across the Sahara Desert to reunite him with his beloved friend at all costs. When his rightful owner repossesses the Black, eighteen-year-old Alec travels across the deserts of Arabia to find the great stallion and helps to solve a tribal feud.

Starting in Zagora, Marocco and ending in Tunesia this was on of the most demanding horse films ever made. With a huge cast and crew working deep in the Saharah dessert there was always the possibility of something wonderful or tragic just arount the corner. The song of the Berber tribes filled the night air and brought together families that had been parted for generations! Fantastic scenes of wild horses free in The Black’s ‘hidden valley’ were filmed. But how can you find a black stallion running away in the moonless dessert? (game)(tf)

Director ROBERT DALVA has been involved in many facets of filmmaking during a career that includes documentary production, feature film direction, cinematography and commercial work as well as editing major films. 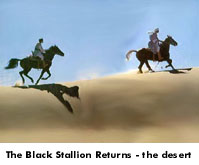 The New York City native attended Colgate University, Harvard University and Syracuse University before completing his postgraduate work in cinema at USC. He became a cameraman on industrial films, commercials and documentaries before working as a second unit director on the films “Star Wars,” “The War of the Roses” and “Raising Cain” and second unit cameraman on “The Black Stallion” and “American Graffiti.” He directed many award-winning documentaries, including the celebrated PBS production “Voyage From Antiquity.” Among the features he has edited are “The Black Stallion,” “Latino,” “Raising Cain,” “The Joy Luck Club” and “Radio Inside.” He has also acted as an editorial consultant on such films as Wayne Wang’s “Dim Sum” and John Korty’s telefilm “The People.”

CAROL BALLARD (Director) is famed for directing films characterized by imagery that has a truly lyrical quality. His screen credits include The Black Stallion, Never Cry Wolf, Wind, and Fly Away Home.

Ballard, son of a Lake Tahoe boat builder, grew up in California. He served in the Army and, inspired by several films he saw during those years, he enrolled in UCLA’s film school in the early 1960s, in the same class as Francis Ford Coppola. Following graduation, Ballard made numerous short narratives and documentaries, often “starring” animals. In 1967, Ballard’s documentary, Harvest, produced for the US Information Agency was nominated for an Academy Award. In 1977, Ballard worked as a second unit cameraman on Star Wars. Two years later, he directed The Black Stallion, captivating both critics and lovers of children’s literature with his vision of Walter Farley’s classic story.

CALEB DESCHANEL’s (Director of Photography) director of photography credits include The Natural and The Right Stuff, both of which earned him Academy Award nominations, and The Black Stallion (also teamed with director Carroll Ballard), which was widely acclaimed for its visual beauty and which brought him a British Academy Award nomination. He also received the National Society of Film Critics Award for cinematography in 1979 for his work on both The Black Stallion and Being There.

Deschanel’s other films include Apocalypse Now (he was credited was insert director of photography), The Slugger’s Wife, and More American Graffiti.

Television viewers know Deschanel’s work as a director through several episodes of the series Twin Peaks. He also directed the films The Escape Artist, Crusoe, and a number of short subjects.