Been meaning to write about his one … a good summer read …. or maybe that Christmas gift for someone special?
If you have time on your tablet there’s some fun here; Lot’s of other gifts (click) too!! 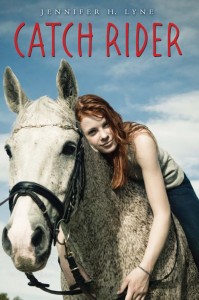 more as a pdf; ebook

Lonely people have enthusiasms which cannot always be explained. . . . When something touches their emotions, it runs through them like Paul Revere, awakening feelings that gather into great armies.

IT WAS RAINING hard and the lightning was getting close. I ran the red gelding down the path in Dunn’s Gap and listened for that moment when a horse is at a full gallop and none of his feet touch the ground, because during that split second, we’re flying. I pretended we were racing a train as the trees whizzed by, their branches scraping my jacket. I lay down on the horse’s neck to avoid a low branch. Water dripped off my riding hat into my mouth, tasting of sweaty nylon. I spat it out and wiped my face on my sleeve while I kept my eyes up, banking around a muddy turn.

As we galloped, the rain came down in a roar. I was soaked through. The reins were slippery and I fought to keep a grip on the horse. I dug my fingers into his dirty mane and around his martingale strap to hang on. I’d tied his tail into a tight mud-knot, wrapping it around itself into a ball so it didn’t fall past his hocks. It would be easier to get the mud out later.

The red horse took the bit in his mouth, bore down, and ran for it like he was loose in the field. He must have forgotten I was there. His ears were forward and he wanted to go, but it was slick, and running like this in the mud was dangerous. If he stumbled, he could send us both down the ravine. One shoe clinked loudly against an old rusted pipe that was gushing rainwater down into the creek below, but it didn’t interrupt his stride or worry him one bit. I listened to the confident, rhythmic hoofbeats, and I grinned.

Quick thoughts began to flicker in and out of my mind. This was the last of the big summer storms and the last day before school started. Every time I thought about it, I felt sick to my stomach. I hated school. I couldn’t sit in a plastic desk all day, couldn’t stand being inside under those awful lights with those teachers staring down at me. If you had to squeeze yourself into a girdle to stand up and try to teach a bunch of hillbilly kids—well, that was just pathetic. I hated the way it smelled at school, the way the rednecks in the hallway would yell and scream like they owned the place.

One time I’d heard a boy say, “That’s Jimmy Criser’s girl—they live in that shitty little gray house behind Hardee’s.” When another boy laughed, I looked at him and said, “Well, at least my daddy ain’t a drunk like yours.” We all know things about each other in Covington. And people who make fun of me wish they hadn’t.

All these kids thought they were cool, but I knew they’d never amount to a damn thing. They’d work in the paper mill until the day they died. I know that sounds mean and angry, but I’m not either one. We have a life to live that could stop any minute, and I guess I can’t believe this is how some people want to spend it. It makes me sad as hell. I want to ask them, don’t they want to know what’s out there? I sure do.

One day, I’d win the Bath County Horse Show up in Hot Springs, where all the rich kids competed every June. I’d jump every fence perfectly on a big, shiny, braided hunter, and I’d jog my horse into the ring to claim the silver cup and tricolor championship ribbon. The wealthy kids lining the rail would say, “Damn, that girl can ride anything.” Melinda, my mother, would stop cursing horses and love them like she used to, and her dirtbag of a boyfriend would fear me. The kids at school would whisper to each other, “How’d she learn to ride like that?” And some kid might say, “She’s the best rider I ever saw.”

I stood up in the stirrups and planted my hands on the red horse’s withers to slow him down. He pulled against me, and I wondered if I’d have to run him into the bank to make him stop. I couldn’t hear Wayne’s horse at all. The creek always ran hard and loud back there behind Coles Mountain. It probably sounded just like this two or three hundred years ago. I wished for an instant that I could have lived back then and spent my days running through the woods on a horse. If you were fourteen in those days, Jimmy used to tell me, you worked just like the adults, didn’t waste your time at school. Kids were baling hay with a team of horses at nine years old.

The red horse tore around a turn, his ears shot up, and he slammed to a stop. My feet came out of the stirrups, and I had to tighten my knees like a vice to hang on. What the heck had he seen? Maybe June, hiding behind a tree?

The horse snorted hard, and finally I saw what he saw: a hickory had fallen across the path, gotten caught in another tree. Damn, he had good eyes. I could barely see it. Some horses can stand right next to a locomotive and not mind one bit, but others will damn near tear the barn down if a woodchuck runs by. I was right. This red horse didn’t shy at anything. His eyes were locked right on that fallen tree in a way that made my palms sweat.

I waited a moment for Uncle Wayne to catch up. I heard the smack of another horse’s hooves, and my uncle galloped out of the fog on his brown horse and stopped too. His horse was blowing hard with his chest lathered up. Uncle Wayne squinted, his face slick from the rain running off his baseball cap. He cursed. It would take forever for us to backtrack, and the hill was too steep to walk the horses around the fallen tree. They’d be up to their hocks in mud, and I imagined us sliding down the hill, a tangle of reins and hooves, into the ravine. Horse people are always walking that line between being brave and being crazy. Sometimes it just depends on how things end up.

The red horse looked at the fallen tree and pulled on the reins, wanting to go. It must have been four feet high, and I had never jumped anything that big. The horse faced the jump and squared himself up for it.

I felt the horse coiled like a spring underneath me, and I dug my heels into his sides. He planted his hind feet in the mud, got his hindquarters up under himself, and took three big strides. But he got in too close. He sprang out of the mud and must have cleared that fallen tree by a foot. I tried to hang on, but even though I had a handful of mane, I was left behind. When he landed, he shook me loose. I fell hard in the mud, and everything stopped.

Still holding the reins, I put my hands to my face, opened my eyes, and realized the horse was gone. The bridle lay next to me—I guess I’d pulled it right off his head. Now he was running around Dunn’s Gap wearing nothing but a saddle in the pouring rain.

Wayne was on foot in the woods twenty feet away, trying to get to me. He swore again as he helped the brown horse pick his way through the rocks and briars. Finally they made it through, and I looked up at Wayne’s face in the rain. I could see the outline of his skull in his tan skin, and his blue eyes sparkled like big aquamarines. Maybe he was the Grim Reaper, coming to take me to heaven.

“What’s the West Virginia state flower?” he asked me.

“The satellite dish,” I said.

I felt for my teeth to make sure they were all there.

“Damn it, girl!” he shouted. “You’re lucky you didn’t kill yourself!”

I sat up, dizzy and confused, my riding hat lying in the wet weeds. When I inhaled, pain shot out from my ribs. I had a metallic taste in my mouth from the shock. I felt like my bones had crashed into each other.

“When you ride my horse, you damn well do what I tell you,” he said.

“I just found that red horse in an auction pen last Thursday,” he continued. “I don’t know a thing about him—”

“He can jump,” I interrupted.

“Well, that’s good, ain’t it?” Wayne said sharply, looking me in the eye. He was scaring me. Sometimes he looked exactly like Melinda. His little sister, my mother.

He put his hands on his knees and stood up.

“We better go find that half-nekked horse ’fore somebody calls the sheriff,” he said.

We walked together down the path, the wet brown horse hanging his head. I slipped a little in the mud, and Wayne grabbed my elbow. “Watch yourself. Slick as a fat baby’s ass out here.”

We found the red horse by the side of the road looking embarrassed, with one stirrup caught on a farmer’s mailbox.