A baker’s dozen is 13, in case you don’t remember. Why do they always skip the 13th floor and all … it’s just a #, a silly superstition. Can’t imagine anyone would take it seriously, really. There are plenty of real things to be careful of – getting thrown way out there with no one around, getting stepped on w/o good boots (or even with), your horses out in the road, swimming alone or at night, getting lost in a strange city … but 13? Why? Anyway I digress …

Here’s the next book chapter ;

The great light came suddenly, so suddenly that it made Steve’s eyelids smart before he had a chance to open them. And when he did, it was simultaneously with the screams of the mares and Flame. In that flashing second it was Flame’s high whistle that made Steve’s heart skip a beat, for never before had he heard anything like it! It was shrill but without defiance or challenge or welcome. Instead it held the worst kind of fear and terror, that of unknown peril.

Blue Valley was alive with a kind of golden light that had never before been seen there even under the brightest sun. Not even the deepest crag or fissure escaped. The light found everything and bathed it all in an awesome glow.

Steve looked up and saw the hurtling sun coming directly at him! He screamed, his terror matching that of Flame and the mares. Then he flung himself flat, his face buried in the grass, his hands pressed hard against the sides of his head.

A sun where there had been no sun. The end of the world had come!

His face unnaturally pale, Steve lay motionless, waiting for the end to come. In quick successive mental pictures he saw his mother and father, his home and Pitch and Flame. Then a heavy black curtain fell and he saw nothing at all. Seconds more he waited, perhaps minutes. From the smell of the earth he knew that he was conscious. He forced himself to use his ears, to listen. He heard the distant rush of the mares’ and Flame’s hoofs. Then he opened his eyes.

Blue Valley was as it had been … how long ago? Minutes? A lifetime? Had he imagined all this? No, of that much he was certain. He had only to look at the band and Flame to know. The mares had directed their suckling foals into the middle of a small tight ring they had formed; their heads were toward the center, their hindquarters ready to fling strong hoofs at any attacker. Outside the ring stood yearling colts willing to do battle but trembling with fear. Flame encircled the whole group, his eyes constantly shifting in every direction, his every sense alerted to the responsibility of defending his band. But he too was afraid because he could not see what threatened them.

Wear your boots – but not when you’re swimming ;) — tim 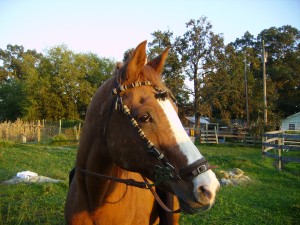