Here’s a special treat for you, an interview with Jeanne Rosenberg, the screenwriter on the movie of “The Black Stallion” (1979)
She was there in the early days and we all had a very strange trip … at the track, on the Drake and back home again. Thanks to our friends at the Horse Channel and Horse Illustrated. Check out the November magazine for two more articles on “The Black Stallion”! 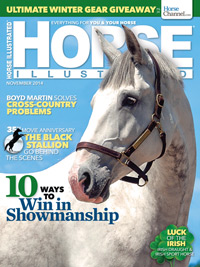 Don’t forget to pick up a little piece of history for yourself @ the Gift Shop!

Never doubt the impact of a college course on life. Los Angeles screenwriter Jeanne Rosenberg can vouch for it. “I had written a script analysis of my favorite childhood book, The Black Stallion, when I was in film school,” says Rosenberg about the door that opened her screenwriting career. “After I graduated, I found out that they were making it into a movie and Carroll Ballard was directing it. I wrote him a letter. I had done a script analysis. He called and said, ‘I really like what you wrote. We have to get together.’ Time passed, we didn’t get together. I called again. ‘Oh, they’re in Canada in pre-production.’ I called him again. He apologized for not getting back to me.”
Crazy about horses from her earliest girlhood memories in Illinois, Rosenberg grabbed the reins of her own destiny. “I said, ‘Oh, I’m coming your way. Do you mind? Maybe I’ll just stop in.’ I was flying from Los Angeles to the Midwest and they were in Toronto.” She arrived in the midst of chaos. “People were tearing their hair out because Carroll wouldn’t commit to anything,” she recalls. “We were supposed to meet for coffee one morning. He was late. I was making some notes on a napkin. He showed up, grabbed the napkin out of my hand and kept my notes. I went home and got another call. ‘Carroll would like you to come back. We need help on the script.”

Rosenberg’s initiative paid off. “It was total chaos when I arrived in the pre-production phase. Melissa Mathison [who later wrote “ET”] got off another plane and we met and became this writing team as we were about to shoot,” she describes. “Carroll hadn’t committed to a screenplay! All the actors were there. Everyone was. The art department didn’t know where to go to dress the set. They didn’t even know the locations. Do we need a farm house? Do we need a race track? What do we need? Carroll liked to keep everything open and see what developed. To have an entire film crew that had to be told [what to do] at every moment and to get that information from a guy who doesn’t like to make decisions is tough,” Rosenberg laughs. “He was driving everyone crazy, of course.”

A graduate of USC Film School [now USC School of Cinematic Arts], Rosenberg planned on a documentary film career. “I remember being forced to take a writing class and thinking, ‘This is ridiculous. There’s no way I’m writing.’ And, here I am,” adds the real-life horsewoman and reining competitor, whose scores of film credits include family favorites like “White Fang,” “Bambi II,” and “The Young Black Stallion.”

The date “The Black Stallion” started shooting in Toronto is etched on Rosenberg’s mind. It was 7/7/77. “We shot the second part of the movie first,” she notes. Meanwhile, preparations were underway to move the crew overseas to film the first half of the movie. “Carroll kept refusing to let us write the island sequence,” says Rosenberg. “Of course, we did it anyway. He has an amazing eye and is quite a storyteller. But he was really more used to being a one-man band, making all of the decisions on the fly.”

Now the mother of two grown children, Rosenberg writes from an office with a view of her American Quarter Horses. She revisited the production that launched her career this summer, when film critic Stephen Farber held a 35th anniversary screening of “The Black Stallion” in Los Angeles.

From a personal standpoint, Rosenberg shares that “The Black Stallion’s” magic remains. “It was fun to see again,” she says. If any scenes can be favorites, these made Rosenberg’s list: “The shipwreck sequence is amazing and scary. The whole island scene was everyone’s favorite. When the boy wakes up on the beach and is staring straight at a cobra ready to strike, and The Black comes and saves him—that’s a wonderful scene. Of course, the boy climbing on The Black for the first time is brilliant. But it all goes back to Walter Farley’s novel,” adds Rosenberg. “He wrote such a wonderful, descriptive story.”