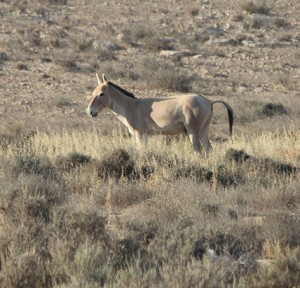 Here’s an interesting story about trying to save a declining species – amazing how much we can learn from research. It’s written by my dear cousin Diana Lutz. So a big THANKS for all your hard work!

The secret lives of the wild asses of the Negev
As a critically endangered population makes a comeback, scientists are keeping a discreet eye on it with the help of GPS and dung
March 27, 2013
By Diana Lutz

The wild asses of the Negev are extremely wary of people, but Brian Hampton, who studies Australia’s wild horses (in t-shirt) was able to get close enough to dart this male, called Tail-less because of a missing appendage. See the video below for the record of Tail-less’ movements generated by the GPS device with which he was fitted. The man on the left with the black hair is Amos Bouskila, another of Templeton’s collaborataors.
The story is too familiar. The Asiatic wild ass (Equus hemionus) which once ranged widely over the desert steppes Mongolia, Russia and the Arabian Peninsula now survives only in small, isolated populations.
It disappeared from the Negev, the desert region in southern Israel, in the 1920s. But a remnant herd survived in the Shah of Iran’s zoo, and some of these animals were brought back to Israel before the Iranian revolution in 1979, where they were bred in captivity. Of this captive herd 28 animals were reintroduced to the desert beginning in 1982 with an additional 10 released in 1992.
But the Asiatic wild ass is truly feral and doesn’t tolerate the presence of people. So once released, the animals were difficult to find, much less to monitor….                                       For the rest of the story (pdf) click here: The secret lives of the wild asses of the Negev