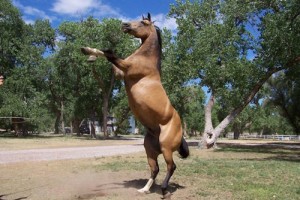 My friend and writer E. McCall just finished this interview with the fabulous Hollywood horse trainer Bobby Lovgren for the latest Cowboys & Indians magazine.
Bobby worked a lot with Corky Randall, head trainer on the Black Stallion movies, and Houdini was one of the “stars” in the “Zorro” movies and “Lone Ranger” among others. The Hollywood horse world is a tough business and anyone that can take the ups and downs, hurry up and waits and last minute changes deserves way more than the little wrangler / handler / trainer line somewhere hidden at the end of the credits. These guys and gals know how to get the best out of their horses and – ON CUE!!!

As the famous cowboy Roy Rogers once wrote; “Just as with human beings, so I believe it is a fact about horses; some are born to perform and some are not. When Trigger and I are about to ride into an arena, I can feel the surge of excitement run through him before the spotlight hits us. I am convinced he takes pride in his accomplishments and that he not only recognizes me but loves me… no two humans are alike, nor are two horses.”

I hope you enjoy this talk with a present day horseman and trainer, Bobby Lovgren,

It will take time until Hollywood horse trainer Bobby Lovgren and family look back on March 27, 2013, as anything but the day Houdini died.  It also happened to be Lovgren’s 48th birthday. That morning, Lovgren made a quick trip to a studio in Los Angeles and picked up a saddle. He was driving home to his ranch in Acton, when his wife Wendy called, “Houdini is sick.”

An hour later, the Lovgrens made a difficult decision together with the two veterinarians called in.  The buckskin quarter horse gelding who’d made his mark in an elite cadre of Hollywood movie horses, now joined the ranks of those deceased.

Cowboys & Indians: What stands out about Houdini’s long career as an equine actor?

Bobby Lovgren: The biggest thing I can say about him, is that he was so much a part of our family. His very first big film was The Mask of Zorro [1998]. Corky Randall hired me on that. Houdini was Captain Love’s horse. I think that was one of two films where he was his own color — buckskin. Most of the time he was black, so he could double other horses. Houdini was such a confidence booster. I can’t even begin to remember all the actors that that he really babysat for, gave lessons to and things like that. This had nothing to do with my training. It was just the quality of the horse and his attitude. All my training did was enhance that.

C&I: How old was Houdini?

Lovgren: We got him in Lakeview Terrace from my horse shoer. I was told he was out of Dash for Cash, but I never got his papers. I think he was 12 when I got him. We never knew exactly. We think he was around 26 when he died, but he always acted like a 15-year-old horse or even younger, because he was always in shape. Obviously, the older Houdini got, I was very protective of what he did. He did the little specialty things. If it was difficult, I had a double for him.

C&I: Who are some of the actors who rode Houdini in his film career?

Lovgren: I think the biggest was on the second Zorro, The Legend of Zorro [2005]. Antonio Banderas rode Houdini the entire time through that.  We doubled him to look like a Friesian. We did a lot of the things at liberty with Antonio, which he really liked. I’d work Houdini on the whips [like a conductor leading an orchestra] and Antonio would ride. That’s how we got his riding much better. Although he rode very well to begin with, he really enjoyed doing that with Houdini. We would work Houdini and I’d take the bridle off and work him loose with the Antonio on him. That’s how I give a lot of my lessons, actually. It gives them [actors] their balance much better. Those things are such confidence builders when you go into a project.  He gave that. Houdini actually had quite a big sequence in “The Lone Ranger.” I can’t say what he did yet because the movie hasn’t been released, but he has a really nice part in that.

C&I: Can you say what color he was, so we can look for him?
For the rest of the story click here

Enjoy the ride … for as long as you can!