All the books and more! 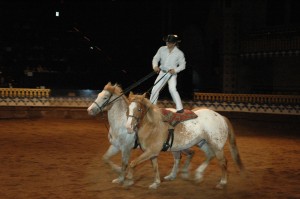 A teacher writes;
I personally read The Black Stallion with my students this school year. I, myself, had never read it. In the beginning, I was worried because a few of my boys were disappointed that it wasn’t “action” packed like the back cover states. By chapter 3, they were in love with the book and so was I. They were eager to read it, and couldn’t wait for the next chapter. As a class, we fell in love with the relationship that Alec had with the Black Stallion. To be able to witness one today was exactly what they hoped for.

One Fabulous Birthday for Carla at Arabian Nights! Lights, Music … Action! It was great to see everyone in the saddle and the show just looks better and better.
Joining in on the night’s fun were the teenage Miss Petites, a festive Barn crew if there has ever been one! Major fun for everyone. We even had a chance to go backstage;

The only one missing was the wonderful web designer, and Carla’s husband – Marcus. But Sao Paulo is far away and someone has to look after the critters
Next time or maybe we’ll all visit Brazil??!!

Come on down and see the show!! 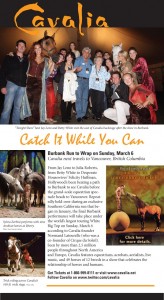 All Things Equine 12-8-09: Bobbie from KAXE Northern Community Radio talked with Tim Farley of the Black Stallion Literacy Project. This project is about getting young kids excited about reading through books about horses and bringing real horses to the schools.

Thought you’d like to see some pictures from the BSLF show in Jacksonville. Here is an article about it, too;

Actors and horses from Arabian Nights in Orlando perform excerpts from “The Black Stallion.”
JACKSONVILLE, Fla. — It’s a book come to life right before their eyes.

Two thousand fourth-graders from around the area experienced Walter Farley’s book “The Black Stallion” like never before as actors and horses from Arabian Nights in Orlando performed excerpts from the childhood favorite and dazzled the audience with daredevil stunts this week.

The Black Stallion Literacy Foundation travels the country, and their mission is to inspire children to read and to spark a life-long love of literature.

The series, which began more than 65 years ago, includes 21 books and has been translated into more than 20 languages.

Tim Farley, the co-founder of the program and the author’s son, said his favorite part is the impact the program has on children and the new doors it opens for them.

Fourth-grade literacy levels affect people more than you might think.

Not only are the children the future of the country, but Farley said the government decides how many cells are built in prisons based on those literacy levels.

It’s easy to see on the children’s faces that they are hooked on “The Black Stallion,” and hopefully reading for years to come.

“I thought it was really cool to see that, because if you read the book and then watch that, you can actually understand it more than when you read it in the book,” said Rene Chinault, a student at Christ the King Catholic School.